Living in California, it can be tough to get into the "fall spirit" when it's 80 degrees out in the middle of October. But I am going to try really hard to get in touch with all things fall starting now. I have to admit though, I am not a huge pumpkin fan - I like a little bit of pumpkin spice for taste, but sometimes it can be too much.

So when I saw a recipe on Pinterest for Pumpkin butter, I knew it was perfect for me to try. The recipe I saw was strictly pumpkin puree mixed with butter, honey and vanilla extract. I knew I needed a little bit of some other spice to lessen the overpowering taste of pumpkin. So I added cinnamon and nutmeg -- and it turned out FANTASTIC.

It only takes 15 minutes to make this butter and I bet you already have the ingredients in your pantry. The recipe makes more than enough to last you a few weeks - just store in the fridge. It is best enjoyed with toasts, muffins, waffles or pancakes.

If you make this Cinnamon Pumpkin Butter recipe, please let me know! Leave a comment or tag me on Instagram @thathangrygurl. 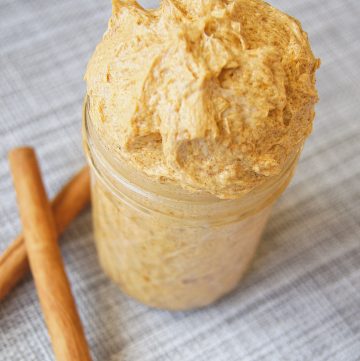