Brunch anyone?! The Royal Peach Fizz Cocktail is the ultimate drink you want at your next brunch. Think of this drink like mimosa's bad sister because I know when I mix hard alcohol with champagne...hello blackout city. But seriously, this combination of Crown Royal Peach, champagne and orange juice is such a vibe.

When Crown Royal first came out with this recipe on their press release, I made it immediately, and my fiancé told me it just tasted like a peach flavored mimosa. While that is yummy, I was a little bummed cause the name, Royal Peach Fizz Cocktail, has so much potential to be a bomb drink. So, the first time drinking it was a little underwhelming because I was expecting more.

But the second time I made it, I increased the amount of Crown I put in. And let me just say, that was a game changer with this cocktail. It took it from basic mimosa and elevated it to a premium brunch drink! Now you may think I am being dramatic, but just try it out first and then let me know your thoughts. I already know you're gonna like it.

This drink only requires 3 ingredients:

Crown Royal Peach is supposed to be a limited-edition flavor that they only sell during peach season, also known as Summer. But I have been fortunate enough to have been able to find Crown Royal Peach year round at the major liquor stores, like Bev Mo! and Binny's Beverage Depot. If you are having trouble locating it, you can check Crown Royal's website for a location near you.

If you are looking for some more brunch ideas be sure to check out my 15-Minute Cinnamon Swirl Pancakes, Homemade Poptarts, or Skinny Apple Cinnamon Oatmeal Cups. 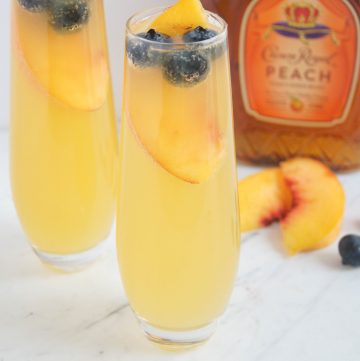