Chocolate lovers, beware! I think I may have found your new favorite dessert with Mocha brownie trifles. Made with soft brownies, layered between mocha chocolate cream and topped with whipped cream, these delectable treats are simple to make and delicious to enjoy.

Drumroll for the secret ingredient, it's COFFEE! I brewed a cup from my Ninja coffee brewer and mixed it in with the chocolate chips over a double boiler. Melting the coffee and chocolate together will give you that mocha flavor.

In recipes that call for heavy whipping cream, you may have seen the word 'peaks'. Peaks refers to the ridges you see on the surface of your mixture when you lift your whisk up. The key to differentiating between soft, medium/firm and stiff peaks is in the shape/structure of those peaks.

For example, this mocha brownie recipe calls for soft peaks. That means as you whip your mixture, you’ll see it start to thicken and become smooth, leaving trails in the mixture. See the picture below for an example of hta soft peaks look like.

Traditional trifles are usually made with fruit, a thin layer of sponge fingers soaked in sherry or another wine, and custard. But many varieties exist and some eliminate the fruit entirely and use other ingredients like chocolate, coffee and vanilla. I chose to layer my trifles with cream and brownies because in every bite you get the amazing flavors of mocha, chocolate and brownie. I mean, come on! Just look at the layers on the spoon, that is a perfect bite.

If you're looking for more chocolate desserts, check out my Chocolate Peppermint Thumbprint Cookies and Oreo Cheesecake . Let me know how you like these mocha brownie trifles by leaving me a comment or DM on instagram at @thathangrygurl 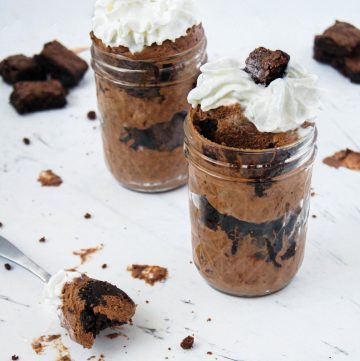