October is National Dessert Month and I have teamed up with my good friend over at Disney Pink Adventures to bring you a Disney inspired dessert each week for the month of October. All the dessert recipes over the next 4 weeks are super festive but simple and fun to make.

First up, we made these adorable Toy Story Alien Cupcakes. The base of the cupcake is made with homemade funfetti batter topped with green-dyed vanilla frosting. The alien faces are made using sour patch straws/rope, chocolate chips, and candy eyes.

The cupcakes will take you about 35 minutes to make and decorations will take about 10-15 minutes. Please remember to let your cupcakes cool completely before attempting to decorate the faces or else you will have droopy aliens.

If you make these Toy Story Alien cupcakes, please let us know! Leave a comment or tag us on Instagram @thathangrygurl or @disneypinkadventures. 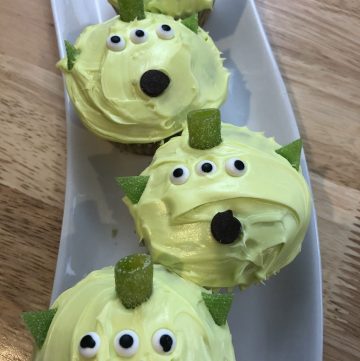