Dessert for breakfast? HECK YES! Then you need these 15-minute cinnamon swirl pancakes in your life! Fluffy pancakes swirled with cinnamon and brown sugar, topped with a gooey cream cheese frosting. They are the perfect mix of cinnamon roll and pancake. I am drooling just typing this!

I got the idea to make these when I was craving cinnamon rolls but was too lazy to make them. If you didn't already know, cinnamon rolls from scratch can be pretty time consuming. It can take up to 3 hours! I definitely wasn't ready to put in that kind of work. Thus, I opted for some box pancake mix and a few pantry staples that made these simple 15-minute cinnamon swirl pancakes.

First of all, these pancakes may look like a lot of work but they are actually very easy to make. Let's go over the "layers" to these pancakes.

TIP: Make sure to let the cinnamon mixture firm up. When you first mix the melted butter with the cinnamon and brown sugar, you will have a runny mixture. So after you place in the Ziploc bag, set it aside and let it firm up. If you don't, once you flip your pancakes over, you will be left with a burnt mess. Trust me, I learned this the hard way.

If you like this recipe, be sure to check out a few of my other simple breakfast recipes: 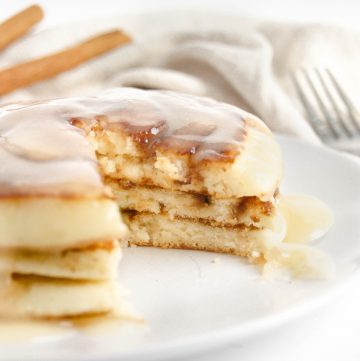